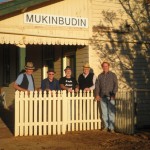 Greetings once again from the Jook Joint Band. Since our last newsletter we have been on a bit of a road trip. The band took to the road and went to Mukinbudin, Bill took to Highway One and went around Australia. He always has to go one better!

We played at the Mukinbudin Spring Festival last year and were looking forward to getting back there to play again. We had to fly Bill back from the Gold Coast to join us in Muka. It was touch and go for a bit as he just couldn’t seem to get himself off the beach and onto a plane. But the trip to Muka was well worth the effort and we weren’t disappointed. The country out that way was looking a treat after some good rains. The dams were full and sheep were fat and given good finishing rains the wheat and canola are threatening bumper crops. All a pleasant change after the past few very dry years.

We played at the sports club on the Friday night and at the train station for the festival /street fair on the Saturday. Once again the people of Muka were really hospitable and made us feel like old friends who were returning to visit. We had the opportunity to see close up just how generous the Muka community really is when it came together as one to launch search parties for a four year old girl lost in the bush at one of the area’s rock feature locations which attract quite a few tourists and campers. We lost some of our audience but gained an insight to good ol’ country spirit and generosity. The young girl was found safe and sound so it all turned out well. Thanks from all of the guys in the band to the Muka community for a great weekend.

Our next gig will be at the Waroona Show on Saturday the 15th October. We start the entertainment for the Show and will be playing the main stage at 10.00am. So get yourselves out of bed early that day and head on down to what from all reports is a great day – better than the Perth Royal Show and Disney combined.

On Saturday the 29th October we will be playing at the South Beach Hotel in South Fremantle. We will start playing at 8.30pm so get your party dresses and put your dancing shoes on and get on down there for a big night of good music and frivolity.

We have been fortunate in being asked back to play at the Bridgetown Blues Festival. This is one of the premier annual blues festivals held in Australia. This year we will be playing three gigs. The first gig is on the Friday night at Scott’s Tavern kicking off at 7.30pm. The second gig is in the Festival Club Hall at 11.45am. This is a great venue to showcase music acts and we are looking forward to playing there(admittedly with some trepidation) . We then kick onto the Freemasons Hotel at 8.30pm to get that ol’ jook joint jivin’.

So we are looking forward to seeing you at one or all of our upcoming gigs. In the meantime get onto our website www.jookjointband.com for our latest photos and music clips.