Well 2014 has been the busiest yet for the Jook Joint Band. We will have played 19 gigs by the end of the year. And we hit the airwaves in a big way getting solid airplay on over half a dozen radio stations around Australia- we got high rotation in Tasmania!. And we sold more CD’s than any previous year.

One of our recent highlights included playing to a packed house at the Indie Bar in Scarborough (some may recognise it from the day as the White Sands Tavern). We had the privilege of being asked along as support band for Josh Johnstone for the launch of his latest EP “Half a World Away”. Check Josh out on www.joshjohnstone.com . It was a great night and we got plenty of really positive feedback from a much younger audience than we usually play to. We had them up dancing which was a real boost. The house sound guy gave us a great compliment when he said he really enjoyed our music and encouraged us to try for more gigs at the Indie.

Prior to that gig we played at the Mukinbudin Spring Festival. Once again we were warmly welcomed by the Muka community. They are having a hard year out in the eastern wheat belt with many farms not even managing to get a crop worth bringing in. This did not stop the town and surrounding residents on putting on a great festival and enjoying themselves. I thought we may have a bit of trouble with the locals when Birchie decided he would dress himself up a bit and insisted on wearing a cravat to the big dinner event. But the locals took it well and just steered well clear of him (we also pretended we didn’t know him).

We have also been getting back to our roots with a couple of gigs for the Cannington Show (Pas’ old stomping grounds) and a gig for the Belmont Council which is Sean’s shire. 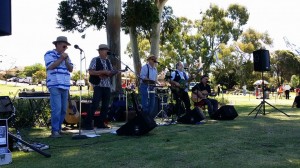 We played at the Swallow Bar before that and will be playing there again at 5.00pm on Sunday the 7th December. So make sure you keep that date free. Be early as the venue only holds about 60 patrons. And make sure you try some of the great food they have on offer.

We have a private party and a corporate gig to finish off the year.

We look forward to the New Year when we are looking to start the year off with a show at the South Beach Hotel. That will be our 10th Anniversary show. So we will be calling on all past present and future band supporters to come and celebrate that event with us. It’ll be a big one, so bring along your party attitude and dancing shoes.

We will be then going in to hibernation for a few weeks whilst we work on putting together the music for a new recording which we anticipate doing in February.

So if we don’t catch you before the Year’s end the boys from the Jook Joint Band wish you and yours all a Merry Xmas a great New Year and thank you for your much appreciated support throughout the year.