We’re back. Greetings from the Jook Joint Band. We all returned safely from our various trips away. Peter was off to the US of A checking out jug, jazz and country bands. He travelled from Nashville to the Appalachians sourcing out experiences and inspirations. He came back with some great ideas and some crappy T shirts. Sean & Bill were in Europe introducing a new audience to the delights of jug band music. They managed to play before a captive audience a number of times whilst floating along the Main and the Danube Rivers. They haven’t been invited back but, hey, they had a good time. Pas & Paul stayed in good ol WA and kept the home fires burning.

We had hoped to get a new recording done in August but fate did not allow it to happen. Between sore throats and some heavy social commitments we didn’t manage to get any tracks down. We are hoping to get the recording done late January/ early February. We are looking forward to working with Pete Grandison at Shanghai Twang Studios and getting some of our more recent originals down onto disc. 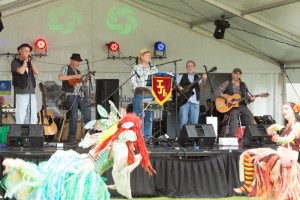 We recently played at the Waroona Show. We had a couple of sets. The first one went off a treat with the local kids getting into it and up dancing. The second got washed out with rain. Whilst all the local cockies would have appreciated the rain it was a shame it came on the district’s big day of the year. I would encourage everyone to keep a lookout for these district shows as they do offer fantastic local produce and some great entertainment.

The next gig for the Jook Joint Band is on the main stage at the Canning Show at 8.15pm, Friday, 2nd November. The Canning Show is held at the Cannington Greyhounds site. We would love to see you there. There will be plenty to see and do at what is probably the second largest show in the Perth metro area.

If you don’t manage to catch us there come and see us play at the East Fremantle Festival on Sunday the 2nd December. We played there last year and it was a real buzz. The festival takes place in the George Street precinct and is one the best shire festivals held in the metro area. Great stalls, great food, interesting and quirky local shops, and of course the local colourful characters of Freo all add up to a great day out.