It is with great sadness that in late October Paul Wade, good friend, bass player, sound technician and founding member of the Jook Joint Band passed away after fighting cancer for the past year. He is sorely missed by his family and friends. We thank Paul for his friendship and support he has given us over many years. May he rest in peace (but more likely he’ll be cranking out the bass line of eternity someplace).

We are rushing towards the end of 2017. We have had a stellar year with the release of our album ‘’Shake That Thing”, lots of local and a few country gigs and we also got some exposure on community radio stations around Australia. In fact we got to number four on the Amrap National Charts with “What’s The Matter With The Mill” so we were pretty pleased with that. 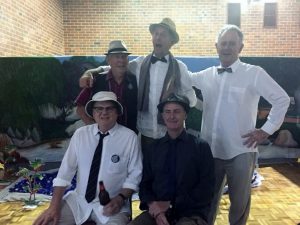 We have one more gig to offer before the end of the year. It will be at the National Hotel, corner of High and Market St’s Fremantle this Sunday arvo 3.30-6.30 pm. Come down and join us to celebrate the life of Paul and see the year out with a bang.

At this stage we have just one gig booked for January and that is also at the National Hotel on Sunday the 21st.

Then we are back to the Swallow Bar in Maylands on Sunday the 11th February.

Look forward to see you soon. All the very best to you and yours for Xmas and the New Year.