As the year draws to a close, JJB has one more gig… at Rodney’s Bait n Tackle on Thursday 22 December, so the guys will be wearing Xmas hats and hope to see a few of you doing the same!

Since our last newsletter we performed at Blues at Bridgetown Festival, we started off on a unfamiliar note by being told to move off the street by traffic marshals, as we trying to get to the gig by driving on a closed to all traffic street. Anyway, all good we had a driver move our gear in a golf buggy to the Bridgetown Hotel.

The early morning crowd were great…even if a few looked the worse for wear from seeing too many acts from the night before.

Later that day, after a sleep in the park for a few of the boys, we played at the Festival Club. It was a fun gig, but before the encore  Larry’s friend was asked to leave the venue for taking a few photos of us…we will have to get a press pass for Lynne next time.

On the Sunday we played at Geegelup stage,  Bill had already booked a flight to Broome and was unable to join us so the four of us soldiered on; we took a bit of ribbing from our friendly announcer Di of Bridgetown…that we were masquerading as a jug band will no jug, kazoo or washboard that day. A small but enthusiastic crowd made for an enjoyable last set at the Bridgetown Blues Festival.

So many great performance – we managed to catch Tex Perkins, The Vibrolators, Hats Fitz & Cara, Russell Morris and Juzzie Smith to name a few. A team of volunteers make this a very well organised event. For those that have not been before…do yourself a favour and get along next year. 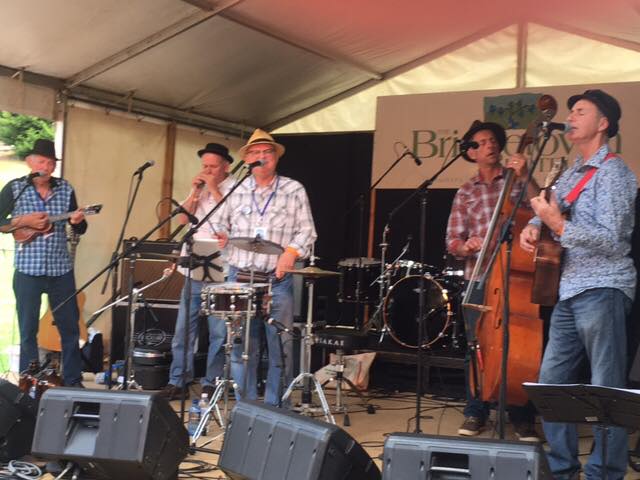 This year our founding bass player and sound expert Paul Wade has had to retire from the band due to ill health…we wish him a speedy recovery and thank him for his years of service to the band. Paul has been instrumental in the development and continuance of the band and will be sorely missed. We offered him a gold watch but he declined saying he plans to get back to music someday soon.

Nick Glorie, a former lead guitarist for JJB, has stepped back into the band on double bass and we welcome him aboard.

All the best for Xmas to you all and thanks to those that have managed to see us at a gig throughout the year and special thanks to all the events, shows and venues that have invited us to perform and in particular to our friends at The National Hotel in Fremantle and at Swallow Bar in Maylands that have welcomed us ALL a few times throughout the year.

Hope to see you at the Boddington Music Festival in February 2017!