The Jook Joint Band had their ‘Jookbox Music’ CD release at the South Beach Hotel on the 18 May. There was a good turnout with plenty making it for a meal beforehand. The show started out with a bracket of favourites then slipped into all the songs off the CD. Then we finished up the night with some get down get dirty dancing blues. It was great to get such a positive reaction to our original material off the CD. It lets us know we are heading in the right direction. Thanks everyone for coming along and supporting the band at this seminal gig for the band. 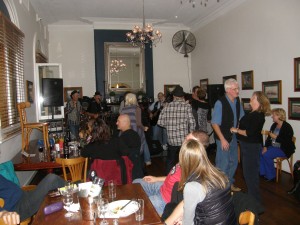 JJB followed up the next week with a charity gig, the Great Gatsby Gala Ball, for the Rachael Doherty Foundation. This was held at the Hackett Hall Gallery which forms part of the WA Museum. It was a great gig with an appreciative audience dressed in all their finery of the 20’s & 30’s – I have never seen so many fur coats in one place before. The Foundation raised over $30k from the evening and was a great success. All the monies go to assisting cancer patients and their families.

The Hackett Hall Gallery was without doubt the most impressive room the band has ever played in – check out some of the photos on our website and the Rachael Doherty Foundation. The hall also houses various dinosaur displays so the boys felt right at home. In fact I overheard one punter point at Pete and say “that that display looks very lifelike”- Birchy was only slightly miffed (I think he appreciated that they thought he looked lifelike).

The next week JJB played at the Arthur Grady Motor Cycle Ride & Fair on a sunny Saturday afternoon in Kings Square Fremantle. There was a good crowd out to see the fantastic range of restored vintage and latter day motor bikes. There were so many bikes on display that they had to limit the number that went on the traditional ride around the town. We managed to attract a chunk of the passing crowd and sold a few CD’s that day.

If you are interested in getting hold of our new CD ‘Jookbox Music’, you can pick it up from Mills Records in Fremantle, Planet Music in Mount Lawley and at one of our gigs. Also you can go to our website, www.jookjointband.com for a sample of a few of the songs.

Once again it seems that the holiday season is upon us. Pas is taking off to the USA for a well earned holiday and Pete is away to Europe for an extended vacation. So to some standing commitments we were fortunate enough to get the good services and company of Nic Glorie back for a while. I think Nic has been secretly shadowing the JJB, as at practice the other night we were all astounded how quickly he recalled all of the songs from our set list.

Anyway all, it’ll be a few months yet before we play again in the metro area. We have a few country commitments which include Mukinbudin Spring Festival, The Waroona Show and then back to Perth with the Canning Show. After that we are free so if you want us at a venue near you let us know and we’ll see what we can arrange.

Also we are always on the lookout for new songs. So if you hear a song that you think would suit our style of music or one that could be rearranged to the inimitable JJB jug band/ dancing blues style please feel free to email us.