The Jook Joint Band has something for you. Something you have been waiting for, something to get you excited, something to share with your friends. Yes they are bringing out a new CD. And you are invited to their CD launch. How good is that?

Well – taking a step back from the hard sell we are looking forward to seeing you all down at the South Beach Hotel (previously known as The Davilak), 398 South Terrace South Fremantle on Saturday night on the 18 May.

As an extra treat Bill has organised a bulk booking of the dining room before the gig. There will be 30+ seats available for friends and fans to eat before the gig. The South Beach has built a reputation for their good food so get in early and phone or text Bill on 0411 134 808 to confirm your place at the table of plenty. The kitchen will take orders from 6.00 to about 7.30pm. JJB will kick off at about 9.00pm.

Many of you probably have no idea just what goes into getting an album together. So… the band practices and practices. The band then brings the music and puts themselves in the hands of the music producer/studio. We were fortunate to have the opportunity to work with Pete Grandison of Shanghai Twang Studio. Pete is great to work with, what an ear that man has. He loves music and it shows. Many thanks to Pete for the experience and for his input and skills which went into making the CD.

The next step was getting the photo shoot done. Clancy’s Fish Pub graciously made the pub available for the shoot and gave us access early one Sunday morning before opening time. And thanks also to Dan Bedford who got himself out of bed bright and early to take the photos.

For your enjoyment and listening pleasure we have recorded four originals songs and four covers of some fine old jugband and traditional music on the CD. Paul came up with the tile of the CD “Jookbox Music”. The band nearly came to blows in deciding on the order of the songs – but all was resolved by way of that time honoured tradition of putting it to the vote. As with any election there was plenty of slander and personal vilification (but Bill has apologised to everyone since).

Thanks also to Nick Le’Par for the fantastic artwork and to Andrea Panara for the graphics. Peter B did a great job organising all the myriad of things and people to bring it all together. 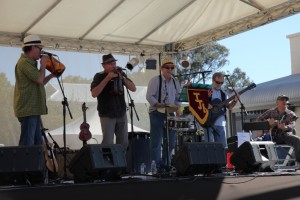 We have been out and about playing here and there. Since the last newsletter we have played at the Canning Show. We had a full brass band on before us and burlesque dancing girls and magicians after us and during the show we were in competition with the fireworks. I think we won out over the fireworks as they have asked us back this year for both days of the show. We played a gig at Bill’s New Years Eve bash which was good fun. And most recently we played outdoors at the Perth Cultural Centre as part of the series of musical presentations put on by the Western Australian Folk Federation. That was a very pleasant way to spend a sunny Sunday afternoon.

Following up from the South Beach Hotel gig we will again be playing at the Heritage Festival in Fremantle on Saturday 1 June at Kings Square for the Arthur Grady Motor Cycle Ride & Fair. This takes place from 11am to 2.00pm.

You can go to our Facebook site right now to catch a taste of some of the songs off the Jookbox Music CD.

We look forward to seeing you on the 18 May at the South Beach Hotel.