To quote the lyrics of that fabled song – “I question my perceptions…query my existence… but I cannot deny…”  Yes Covid-19 is still with us.

Some have lost close ones and others seemingly suffer endlessly the long term physical and/or emotional effects. Most of us in this state look across the borders and thank god we are not them. Others bemoan we are not them. For most of us in Western Australia it messes with our lives here only in trivialities such as the time it takes for our Amazon packages to be delivered or our limited travel options.

It does manage to twist and turn our lives in other ways as well. I notice our last newsletter back in June was spruiking an upcoming gig for the Jook Joint Band at the Perth Blues Club – well that didn’t happen did it. But fear not the opportunity re-presents itself this coming Tuesday 7 September at the Charles Hotel. The renowned ‘Midnight Jammers’ will be preceding JJB to the stage so ensure you get there early to catch them.

Prior to the Blues Club gig we play at the Australian Men’s Shed Association Long Lunch. All the guys in JJB are members of the Fremantle Men’s Shed. We regularly use the studio at Freo Men’s Shed for practice and are honoured to support the men’s shed movement in this small way.

We follow up on the Blues Club gig with a show at the Pirate Bar, Mt Hawthorn on Sunday 10 October at 5:00 pm. 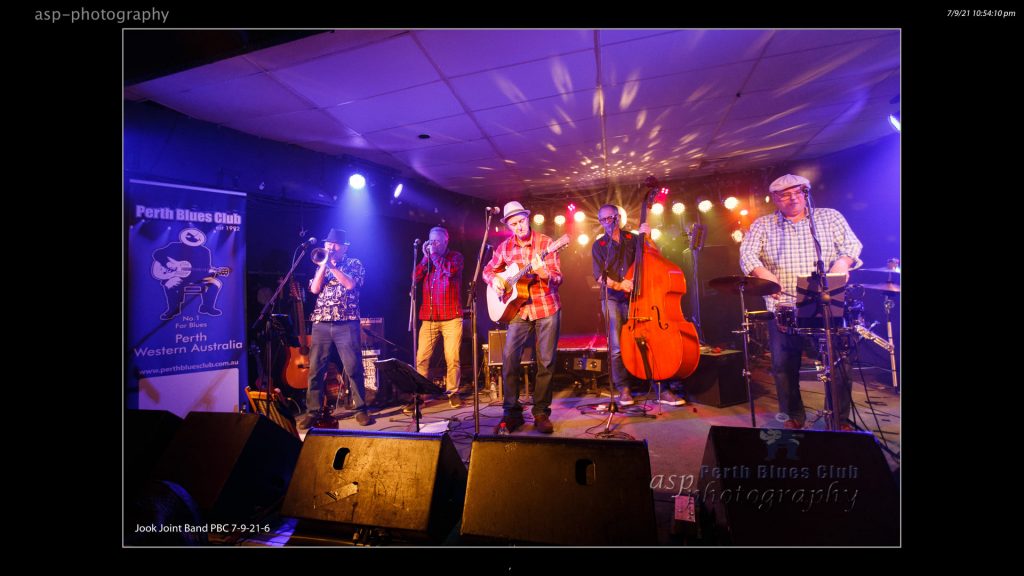 Following the Pirate Bar gig we are looking to have an extended break. Some of the boys will continue their in-depth exploration of this wondrous state. Sean and Bill are off to explore the goldfields. Peter makes further forays into the south west disguised as a wine and food connoisseur. Nick intends to make some serious inroads into getting he and Biddy’s Albany abode shipshape. He has the architects plans to hand and is awaiting shire approvals and is chomping at the bit to get down there to be consumed by the endless works and labour involved in bringing back to life one of Albany’s historic landmarks. Larry…. well… he has been developing a somewhat unhealthy internet relationship with Brian. Now it is all Brian says this, Brian does that, see how Brian does it. Larry is living the life of Brian we thinks. Well he has certainly picked up quite a few tricks from him. Guitar tricks that is – Brian is Larry’s guitar teacher guru. And we have been blessed with the fruits of their association. May their relationship continue to be long and bountiful.

So for those who are not stick in the muds and manage to get themselves out and about midweek we look forward to seeing you this Tuesday night at the Charles Hotel. The rest of you we will be expecting to see Sunday 10 October at the Pirate Bar.

P.S. The fabled song mentioned above is “Gilding Penguins” – written and performed by the Jook Joint Band – well it’s not likely to be claimed or played by anyone else is it!