Hello all , it has been  relatively quiet in the world of JJB in recent months.

To his credit he spread the word of jug band music while there and tempted us with dreams of overseas tours. 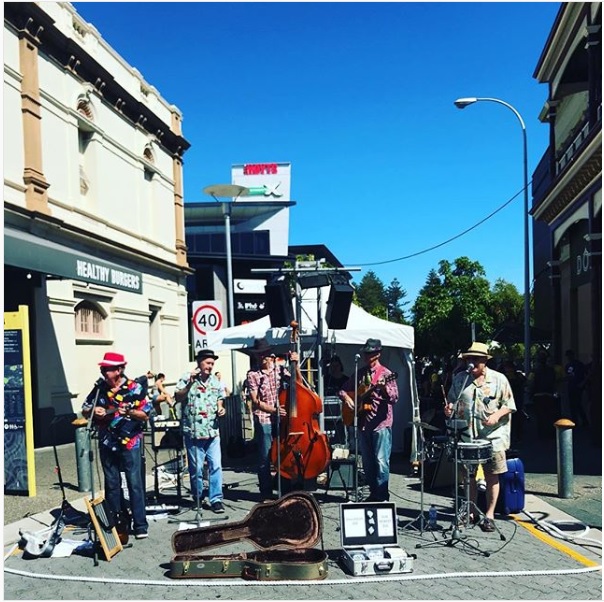 We have continued our regular Sunday afternoon slot at The National Hotel in Fremantle and have appeared in many selfies taken by overseas tourists. They appear to like the music but I am not sure what they make of the lyrics. What is Mandarin for ”I got the blues so bad”?

We had another great gig at the Swallow Bar in Maylands. One couple were so taken by the music they were literally dancing in the street. The next day Sean and clan took off for Russia. Pity the poor Russians they have only just cleaned up after the world cup lager louts.

In Sean’s absence the rest of the guys are learning new songs for our upcoming gigs. This Sunday we will be at the Perth Royal Show at 3pm and 4:30pm thanks to WAM (West Australian Music) https://wam.org.au/event/perth-royal-show-2/ .

We have a big gig at The Fly By Night Club in Freo on the 21st  of October, this is a fundraiser for the club so come on down.

if you happen to be around Freo, do feel free to drop in and say hello. If you need to cry in your beer you can do it between 5 pm and 6pm when it’s happy hour!

Hope to see you all soon.