After completing a dynamic 2018 season, Jook Joint Band opened 2019 strongly…Tthe lads have played a half a dozen performances to date in this year and have some great gigs lined up.

The rapid growth of new bars and taverns over the past few years has opened up many opportunities in the Perth live music scene. There have been many stalwarts over the years such as the Charles Hotel -the home to the Perth Blues Club, the Rosemount Hotel in North Perth (check out the great rockabilly on a lazy Saturday afternoon) and Mojo’s in North Freo- these regularly feature frontline acts. Then there are the idiosyncratic places such as Rodney’s Bar in Mosman Park, The Ellington Jazz Club in East Perth and of course the Swallow Bar in Maylands (any Thurs/Sat/Sun).

These and many others have nurtured and supported the lively and growing base of blues, jazz and folk music in Western Australia. New bars such as the Duke on George in East Fremantle and the recently opened Freo Social (in the old Parry Street Fly by Night Club army hall premises) have joined in supporting and promoting live music.
Also the number of blues festivals and concerts organised by shires and councils around the state seems to be on the increase. So the local music scene is varied and vibrant. Get out there and have a taste. 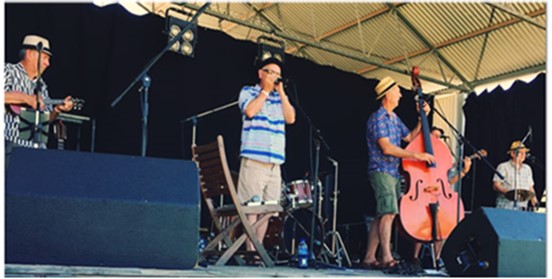 The band played at the Boddington Music Festival in February. It was a well organised festival with a strong line-up of bands. Although I think the highlight for the JJB guys (and the lads from the Josh Johnstone Band) was the absolutely fantastic breakfast feast we were provided with the next morning. Our grateful thanks to Mark and Sandy Gordon for their wonderful hospitality.

JJB were fortunate in playing a couple of gigs at The National Hotel in Fremantle- this is another venue that have actively supported a cross section of local live music over the years. We also played at a new venue for us, the Freo Harbour Bar at the E Shed Markets . That gig was a hoot – it was great being joined by all the visitors disembarking the Rotto ferries (each secretly smug with the knowledge that their recent selfies with a quokka were going to be the next big thing on Facebook). We enjoyed some great people, great pizza and yet another fantastic sunset with the Fremantle docks as the backdrop. It’s a good arvo outing – visit the markets, easy parking, plenty of food and great music. We are looking forward to playing there again on Saturday the 2nd June and again for a few dates at the end of the year. 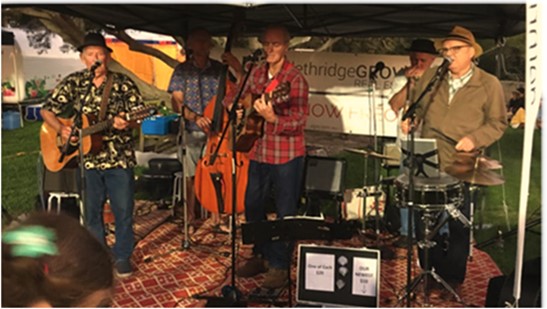 We also played at the South Beach Sunset Markets. It was a bit windy with a howling Freo Doctor for the earlier part of the gig. But it was a good crowd and where better to play (and eat) than a place where you are surrounded by twenty of the best food trucks Perth has to offer and yet another stunning Indian Ocean sunset.

We will be playing at Yagan Square in central Perth this Friday night at 7.30pm as part of the WAM Beats and Bites event. Looking forward to the opportunity to amaze a new, unfamiliar and unprepared audience with the finger clickin, leg slappin, high kickin , dance music that we are gunna give to them.
Come along for some fun – get a selfie with a startled audience member. See you there!