Hello out there. It has been a busy start to the year for the Jook Joint Band. To date we have had about a half a dozen gigs, having played at the Swallow Bar, The National Hotel and The Perth Blues Club. We are fortunate to be invited back to these venues who are all active supporters of the live music scene that forms an integral part of WA’s society and culture and we feel privileged to be contributing to that in our own inimitable way. 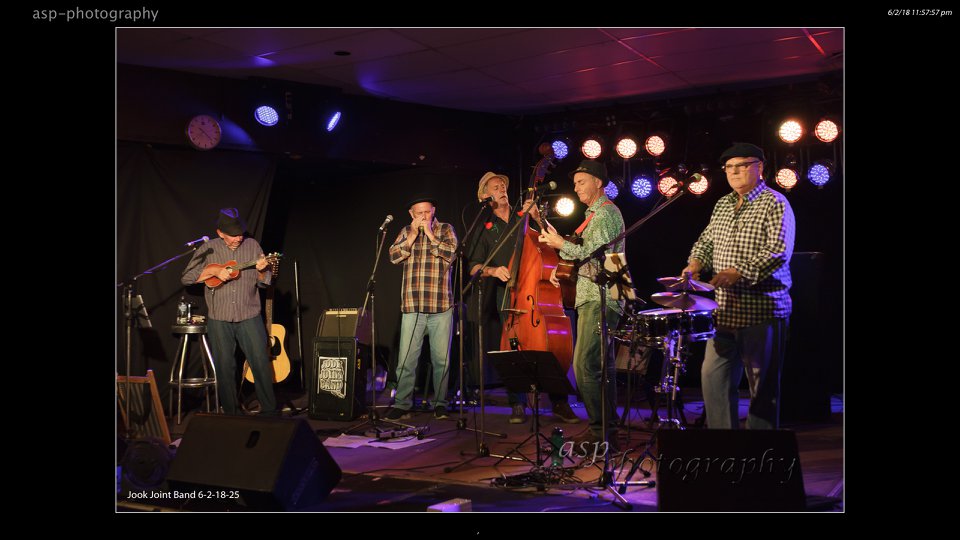 JJB at The Perth Blues Club

We have had the good fortune of having Nicole Howard join us up on stage to provide her sweet vocals to a number of songs when we have played at the National for the last few gigs. So thanks to Nicole for her great contribution and efforts.

We have a busy period coming up interspersed with various road trips and holidays for some of the guys in the band over the winter break.

Over the Easter long weekend we will get our first foray into the high octane, dog eat dog world of street busking. We will participating in the WAHonk Fest! as part of the Fremantle International Street Arts Festival from 30th March to 2nd April.
This is a huge weekend in Freo presenting many and varied forms of street art, theatre and music and we are lucky enough to be part of the mainstage entertainment.
If you’re in Fremantle over Easter join the crowd and catch some of the music and street artist’s entertainment. It’s all for free! (though all the participating acts will be passing the hat around so be there and be prepared to part with some of your hard earned)

Additionally, Josh Johnstone is part of the bill… for full details and playing times click on the link below:

Jook Joint Band and Josh Johnstone are both part of the WAHonk Fest! Closing Party line-up at Clancy’s Fish Pub. This will be a great party affair happening on Monday 2nd April between 5.00pm and 9.00pm.

We encourage you to step outdoors into the world of live music and hope to see you all on the streets of Freo this weekend and /or in the bars and pubs that we will be playing at. It’ll be a party.

Other JJB Gigs coming up!
We are back at one of our favourite haunts, the Swallow Bar, on Sunday 29th April. Really love the Swallow Bar and after a bit of a wrap from the Lonely Planet, who mentioned our quirky Jug Band as a part of what’s cool about Maylands…would love to share a bit of Swallow time with you.