The shortest day of the year is upon us- the sun is going down just after 5:00pm and the nights are long and chilly. Well the good news is, the days are about to get longer and the Jook Joint Band has lined up gigs at some of the hottest spots in town. But more details of those gigs directly.

You may have noted in previous newsletters that the lads in the band have a habit of taking off on holidays often and randomly throughout the year. Well Peter (-san) has just returned from a trip up to Japan. Larry dusted off his surfboard and hit the waves in Bali. He returned calling himself Made and telling tall stories about how he surfed all day, every day, and actually caught some waves. We asked to see the photos but they haven’t been forthcoming. We didn’t ask Peter for photographic proof that he had in fact sighted Mt Fuji as he would threatened us with a five hour slide night presentation.

Nick tag teamed with Larry and flew up to Bali as Larry was returning. He’ll also probably come back with tall stories of surf and excessive eating. Daniel Low, our number one fan and occasional roadie, is also currently in Bali and he will no doubt return telling outlandish tales of adventure and fine dining. Sean is touring the southern wheat belt taking in the tourist highlights, eating pies and burgers and drinking Carlton Draught. Not sure if Bill is in town this week, as he is constantly taking off for a few days down south and has just returned from sunny Broome. He has advised that he has booked tickets for Ireland so that he can catch his auntie’s birthday- she will be 102!! 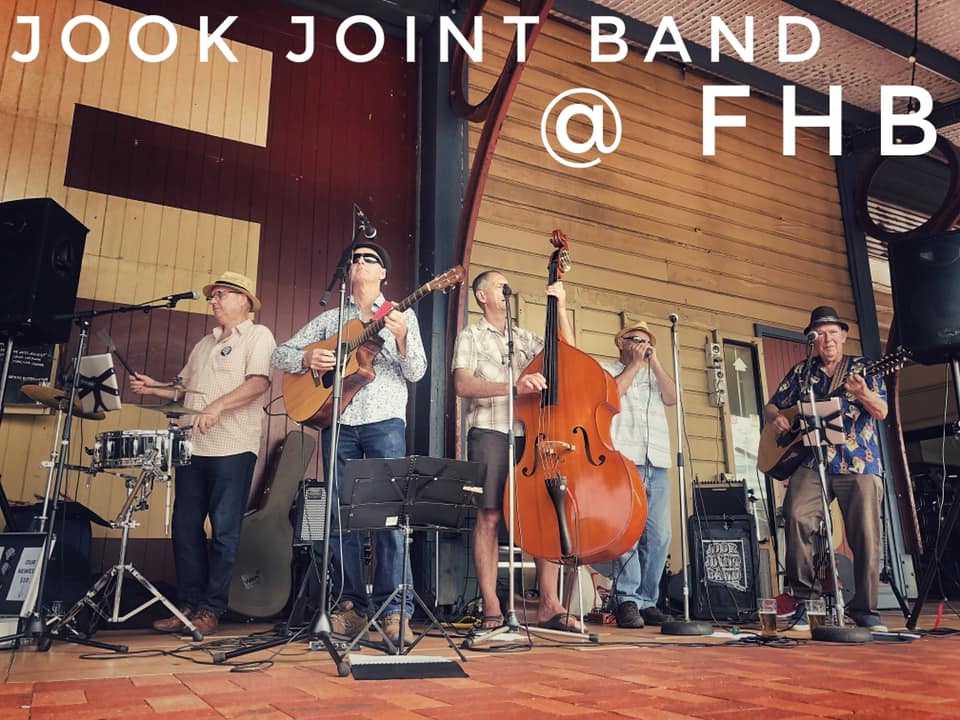 So between the lads travel adventures they have managed to play recently at the National Hotel, the Freo Harbour Bar and a Pavement Party in South Freo, which included should great boot scooting …we hope to see them all again soon!

Coming up this Sunday we will be playing at the Swallow Bar in Maylands. Congratulations to Team Swallow for once again receiving well deserved accolades for being the 2019 Small Bar of the Year as voted by the people in WA! The competition is stiff, yet year after year the Swallow is always listed up at the top. So if great company, food, wine and beverages are your thing then get there on Sunday to see JJB or if you can’t make it on Sunday try out the Saturday arvo jazz session.

Keeping with the small bar theme we are fortunate to be once again playing at Rodney’s Bait ‘n Tackle, another of Perth’s acclaimed bars. We kick off after Rodney’s Famous Friday Night Fish Raffle at about 7.15 on Friday 5 July – but we can recommend you get there earlier to get your tickets to the best fish raffle in WA. Have a bite to eat, enjoy a beer or a fancy cocktail and listen to some great music- what better way to get the max out of your Friday nights.

The band is then playing a few gigs at The National Hotel in Fremantle before playing at the Pirate Bar in Mount Hawthorn. The Pirate Bar is a new venue for us and we are looking forward to playing there as it has a great reputation.

Looking forward to seeing you soon.