Hi all! It has been a little while since the last Jook Joint Band Newsletter however we have been reasonably busy. In the interim we have  played a number of times at both the Swallow Bar and at the National  Hotel.

In February we had the pleasure of attending the studios of KCR102.5 for an interview/chat and  live recording of three songs. There were a few nerves going in but they were soon allayed by the gracious and professional attention from Pat and Greg. We had some positive feedback from family and friends  who listened to the broadcast so it was a good experience all round.

Also we got in a gig at the South Beach Sunset Markets. The night was balmy, the air filled with aromas of a dozen or more food trucks. The crowd was relaxed and appreciative of the event, the setting , the food and the music. Plenty of little (and big) kids up dancing. It was a good gig. But next time we will be taking the full PA system so all those fire twirlers and youngsters hanging out at the back can hear us properly.

We were then off to play at Rotto …it was to be a swim through. Larry and Nick were to start out from South Beach. Peter and Sean booked a couple of seats at the Gov’s Sports Bar for a heavy morning session. Bill was swanning around the island somewhere trying to get a selfie with a quokka.

But NIck and Larry abandoned the swim over and settled for a leisurely couple of laps of the main beach at South Beach before jumping on the ferry. Sean and Peter ended up missing the morning imbibe altogether. However Bill was successful in getting his selfies – albeit minus any quokkas. Bill said he couldn’t understand why all the quokkas would scamper off on his approach ( we can relate to that). 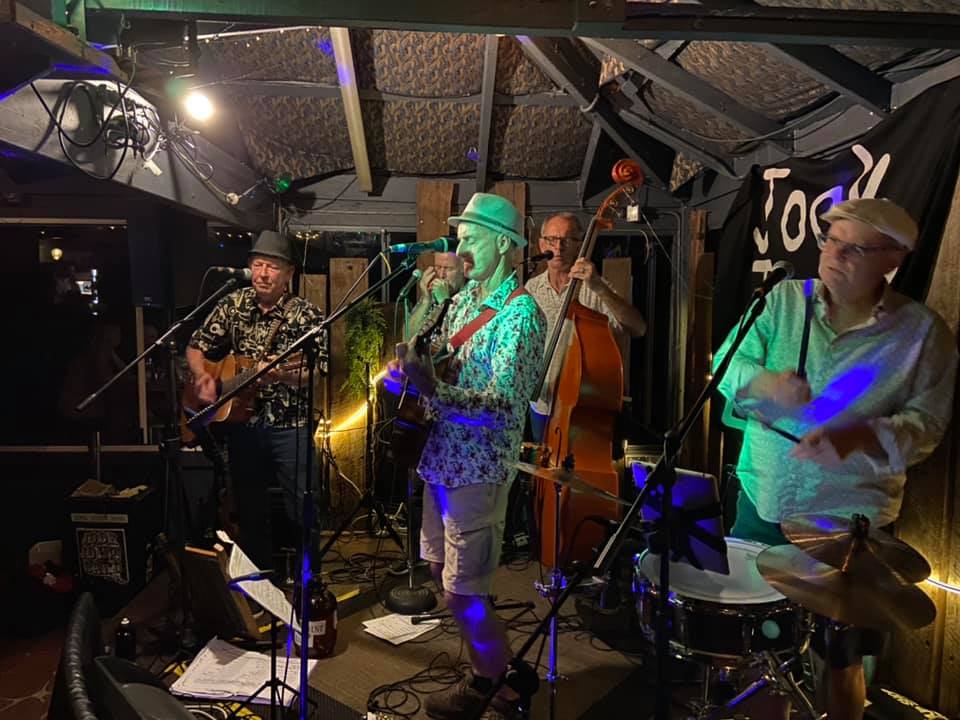 The band was fortunate to have Josh Johnstone on hand to assist with setting up the PA. Thanks for your assistance Josh, by all reports the sound was great out front.   There was a good crowd at the Gov’s and all were intent on having a good time.  As the night progressed the crowd got collectively drunker, the dance floor was crowded out and we even had some in the crowd joining in on our choruses. It was loud, it was raucous, it was fun. And thanks to those generous persons who were buying the boys beers during the evening.

We had a week or two to recover before fronting up at the National Hotel for a Sunday arvo session. Once again we enjoyed the company, the food and the great range of beers.

This Friday we are playing at Rodney’s Bait ‘n Tackle. We kick off at 8:00pm but invariably we get there before 7pm to make sure we get our tickets in the biggest and best fish raffle in WA- Australia- the world! This bar goes off on a Friday night so get on down there and join us for some fun.

Check out our web site www.jookjointband.com for full details of all our upcoming shows.