Hello, Hello –hope your world is treating you fine. 2018 is coming to a close and another Xmas and New Year are soon to be celebrated. To get you into the partying mood for the Xmas break- present yourself front and centre on the dance floor at one of JJB’s upcoming gigs. What better way than that to warm up for the silly season. Christmas is for giving so don’t hesitate to buy the band a beer. Also you can solve all your Xmas gift selection problems by bulk buying JJB album sets- you will thrill the oldies and chill the young’uns’. And any following gifts you give will surely be well received.

The crowd at The National Hotel last Sunday were certainly getting warmed up for the party season. They were a raucous mob who were obviously out to enjoy themselves and they made a great audience. It is always good to play to a receptive audience. The National is looking pretty good these days and now boasts three floors of entertainment. The new roof top bar is definitely worth a visit as it gives you a perspective of Fremantle you would never have experienced before. You won’t find a better spot in Freo to enjoy a meal and a few drinks… ahhh the sunsets. 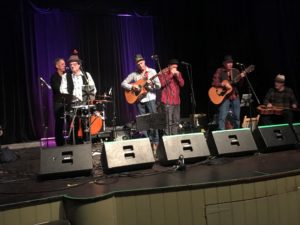 JJB at the Fly by Night Club

For those who have caught our recent gigs you would have had the pleasure of hearing Shane Bradshaw on slide guitar. We would like to thank Shane for his support and contribution as it certainly adds to the bands musicality and Shane has been well received by the band and audience alike. Hopefully at some time in the New Year we will be able to entice Shane back up to gig with us again.

2018 has been one the busiest years for the Jook Joint Band. By the time we see the New Year in we would have performed a couple of dozen times in the year. This is a pretty good effort for a “garage band”. To take you out for this year please check out our upcoming gigs for 2018 as displayed in the column to the right.

To kick off 2019 we return to The National Hotel on the 20 January and 24 February. In addition, on the 9 February we travel to the Peel region to perform and the Boddington Music Festival along with Andrew Winton, Josh Johnstone and Matty T Wall.

Anyhow, all our very best wishes to you and yours for the festive season and the New Year. We look forward to catching up with those of you who can get along to our upcoming gigs. Thanks for your continuing support.