You would have received the recent emails and the texts from your car service company, your optometrist, your local member and all those others you brushed past in the year just gone. They wished you season’s greetings with the smothering sincerity of their advertisers and marketers. Well the one you have really been waiting for is here:-

The boys from the Jook Joint Band wish you and yours a very merry Xmas and all the best wishes for the New Year. Get out and enjoy it!

So with that out of the way we can review the year, tease you with upcoming shows and give other news of import.

You will recall that in our last newsletter we mentioned doing a gig at the WA Men’s Shed Association state dinner. Well as it turned out the dinner was all about presenting Bill with his nomination as the Vice Patron of the WA Men’s Sheds. The Queen’s main man in WA, the Governor, is the Patron so Bill couldn’t fill that spot (just yet). They reeled off the details of Bill’s contribution and efforts over the many years of his involvement and the award was certainly well deserved. Congratulations Bill from all of us for you appointment as Vice Patron of Men’s Sheds of WA. 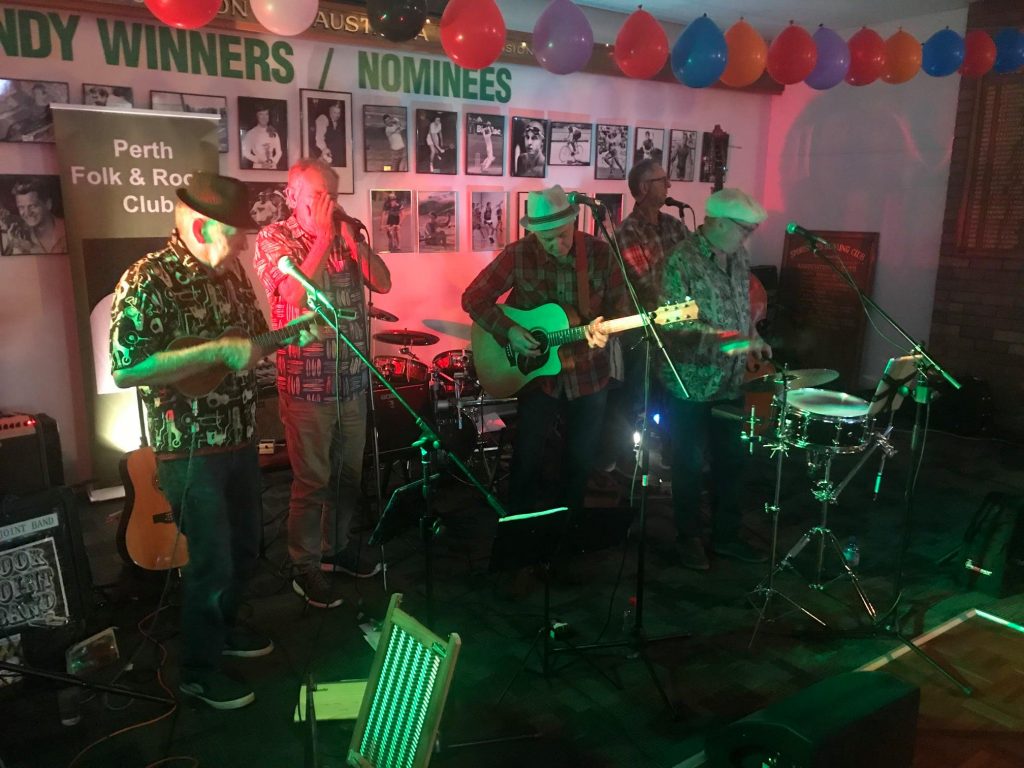 The other big news is that our bass player Nick has decided to take an extended break from his band commitments as our bass player and alto bass singer. As from March he has decided to commit his every available waking moment to getting his Albany house renovated and back to its former glory. This is a long term project and will need all the effort he and Biddy can throw at it.

So what are we going to do? Well we are putting out a call for a replacement bass player to fill in for the medium to long term. We would be pipped if they came with a stand-up bass but this is not by any means a requirement. What is a requirement is a sense of humour, great tolerance (they have to put up with Sean and Peter after all) and an interest in the music we play. So if you are interested or know someone who knows someone please put out the word and have them contact us.

We have a slow start to the New Year in that we don’t have any gigs until 13th February when we return to The National in Fremantle for a Sunday arvo session. We haven’t played at The National for a while so are all looking forward to getting back there. We do a follow up show there on 13th March.

We also have a number of irons in the fire for a couple of music festivals in the new year so look forward to confirming commitments and dates for those soon. So check out our social media pages in the coming weeks!

So go forth and enjoy your festive season. Eat too much, drink too much and just have too much fun!

All the best from Bill, Larry, Peter, Nick and Sean. Thanks for all your support throughout the year. See in the new year.